The new species in the human evolution timeline are coming fast and furious now. A Discovery blog says there are more to come ...

Get ready for more big human evolution announcements in the coming months, as anthropologists have shared with me that a number of bones even older than those for Homo gautengensis await study and classification.

Homo gautengensis is a 3-foot, 110-pound, bipedal tree-dweller that lived from 2,000,000 to 600,000 years ago. The identification is based on, "partial skulls, several jaws, teeth and other bones found at various times at South Africa's Sterkfontein Caves, near Johannesburg" (ref).

Apparently, though, the features of the skull are even more human than Australopithecus sediba, which was being touted by its founders as the most human of the australopithecine lineage. 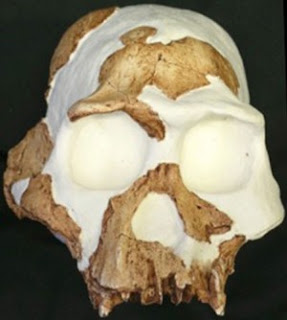 Homo gautengensis is not considered to be a human ancestor, but a side branch of our family tree.

As stated above, many more such branches are expected to be found. Homo floresiensis, the "hobbit" species of Homo, which died out about 10,000 years ago, is another side branch found in the last few years.

Homo gautengensis is from East and South Africa. Personally, I think Homo sapiens arose from the Great Rift Valley in Kenya, Ethiopia, and Tanzania, and I consider all the southern branches of Australopithecus and Homo to be side branches.

But then, I'm not a scientist.

I'm sure there's more coming! Have you heard the recent news that we have Neandertal genes in us? That's from the same scientist who thought we didn't based on mitochondrial DNA.

Now, however, with much of Neandertal Man's nuclear DNA sequenced, it turns out that we share a lot of unique genes with our evolutionary cousin.
Posted by Paul Pavao at 8:35 PM