Nimbadon Fossils and Proof of Evolution

Science Daily reports that a limestone cave in Australia has produced many well-preserved fossils of a marsupial called a Nimbadon.

There's all sorts of neat information in that cave for scientists. They've learned about the growth cycle of this ancient, extinct marsupial. There's some interesting descriptions of how quickly the brain grows, what the skull was used for, how quickly the fetus moved from the womb to the pouch, etc.

But that's not what is of interest to me.

Here's what the find has to do with evolution.

There are no nimbadons any more. (See the original University of New South Wales article for a picture of the skull, which is pretty neat.)

Instead, they are found with "galloping kangaroos, primitive bandicoots, a fox-sized thylacine [note: same genus as the Tasmanian wolf] and forest bats."

All of those are marsupials except the bats, and all of those can be traced to specific time periods. They will always be found together and never found with earlier or later fossils.

Taxodium dubium, a miocene era conifer. Even the flora consistently lines up with the fauna in the fossil record. 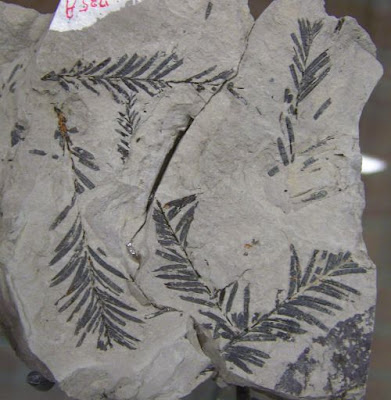 Thus, either evolution happened or God had a large number of creations and re-creations.