Ok, I have to give credit to Dem Bones, who found the "croco-duck" at yet another blog. I'm not just copying his post. I have my own things to say.

I don't follow Ray Comfort a lot, so I forgot he had ever suggested that the non-existence of a "croco-duck" being an argument against evolution. I guess he should have chosen something less likely because now they've found a couple candidates for a croco-duck. One of them is even being called a "DuckCrock." Really!

Let's start with it. Here's the description at the page I just linked:

New fossils of previously named species, Anatosuchus minor. Fossils found in Niger. Three-foot-long upright fish-, frog- and grub-eater. Broad, overhanging snout and Pinocchio-like nose. Special sensory areas on the snout end allowed it to root around on the shore and in shallow water for prey. Closest relative in Madagascar.

There's even one there that they're calling "DogCroc." Ray Comfort--whom I love to listen to, and whom I believe is a good, godly Christian, if a terrible and somewhat embarrassing researcher of evolution--made a mistake in picking his mixed creatures. Both mammals and birds evolved from reptiles. The connection between both is pretty recent (by evolutionary standards).

Of course, neither the DogCroc nor the DuckCroc is actually a mix between the two species. The DuckCroc had a duckbill because the duckbill has proven to be a useful tool on earth. It's evolved several times. There's a mammal--the duck-billed platypus--a duck-billed dinosaur, and now a duck-billed crocodile.

Oh, that one doesn't fly.

Unfortunately, this one does.

This one is a pelagornithid and thus an actual bird. However, birds are descended from dinosaurs, and this "croco-duck" had a bony bill with crocodile-style teeth in it. 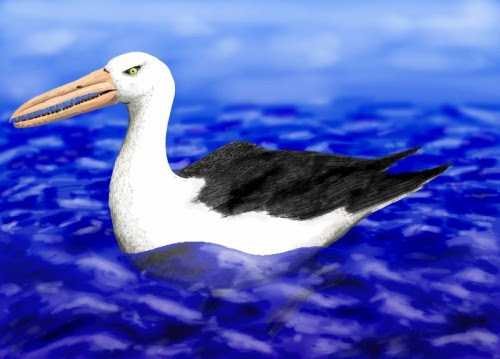 These "croco-ducks" are awesome in that they had a 20-foot wingspan!

Scientists are pretty excited about this last find because the bones of this gigantic bird are extremely thin, so they are not normally found fossilized. Even if they are, they are usually crushed. This one wasn't. You can see a photo of the skull here.

A Note on Crocodiles

I've been told before that crocodiles have been around for 200 million years (which is true). Anti-evolutionists have used this to argue against evolution, asking why, if evolution is true, crocodiles haven't evolved (perhaps into a "croco-duck").

The answer is that crocodiles have evolved ... wildly. That pelagornithidae are birds, but the DuckCroc and DogCroc mentioned above are crocodiles. They lived on land, and they were agile runners. There were five versions of these agile crocodiles found in one place in the Sahara desert.

Isn't all this stuff fascinating? I'm so sorry to my fellow Christians who are threatened by evolution, but we are missing out on some great stuff when we take that stand. Worse, it's stuff created by God, and we're supposed to be the most excited people of all about these things!
Posted by Paul Pavao at 10:47 AM