How to Remove a Cow Brain

I found out the hard way that one of the things you can't find on the internet is how to remove a cow brain from a cow skull!

When my daughter asked me to remove a cow brain from a cow head she'd bought from a friend of mine, I thought she was joking.

It turns out that my friend had bought a slaughtered, whole, grass-fed cow, and apparently the head comes with it. My daughter needed an animal brain for a science presentation, and, ta da ... I ended up with a skinned cow head in my front yard.

My family and friends tell me that some of the pictures that follow this first one are ... um ... disturbing. Make sure you have a strong stomach!

If the first one disturbs you, imagine an electric saw added to the picture before you scroll down the page.

We plan our attack. I'm the guy on the right. 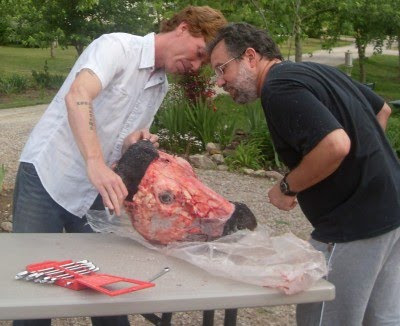 How Novices Remove a Cow Brain

We had no idea what we were doing, so we just started cutting. In case it's not already obvious to you, that's not a good idea.

The head was frozen, so we simply used a circle saw, thinking we were going to remove the "skullcap." 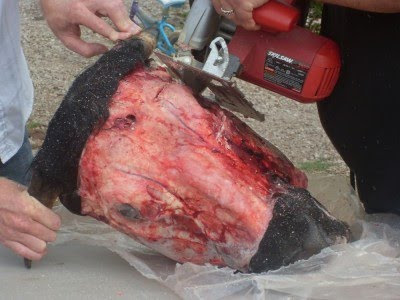 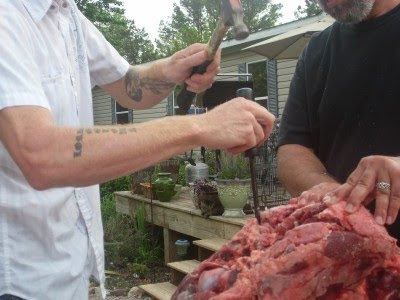 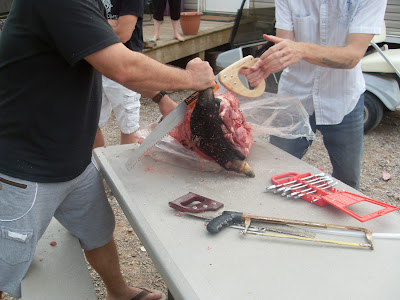 Finally, we just started cutting everywhere with the skilsaw and peeling and prying away what we could ... 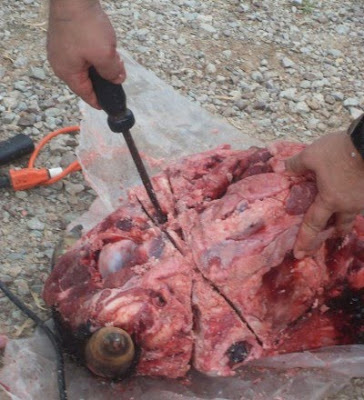 All of this was to no avail. In an act of mercy, my daughter, who is 14 years old by the way, suggested we thaw the skull over night and try again the next day.

I went in the house to shower, covered with sweat and small, ground-up pieces of muscle and skull. For some reason, everyone in the house fled from my presence ... 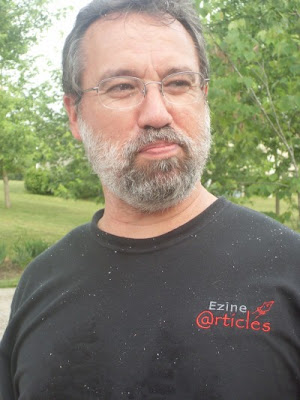 How to Remove a Brain from a THAWED Cow Skull

The next day was a lot better. I thought the head would stink to the heavens after thawing all night and all morning, but it really wasn't bad.

I do live in Christian community of 250 people or so, though, so kids were walking by and parents driving by the whole time I'm doing this. Several of the kids commented that the skull stunk.

The meat was still fresh, though.

You would not believe how much meat is on a cow skull. I am certain I removed 3 pounds of meat from the jaw, cheeks, and, literally, between the ears! It all looked good, too, like it would have tasted excellent in a frying pan.

Since my whole family was horrified at such a thought, I didn't try it. I think if that meat had touched one of our frying pans, I would have been hit with the frying pan.

How We Succeeded in Removing the Cow Brain

Unfortunately, I didn't remember to take pictures the 2nd day. We were focused on getting the brain out.

First, that evening I had looked up a diagram of a cow skull so I knew where the brain was. It starts a little behind the eyes, and it goes back to the vertebra that was visible on the back of the cow skull.


The vertebra is those bones that look like a beak in the center of the picture. 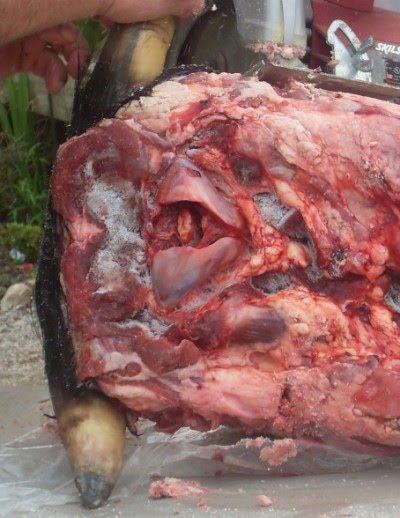 As a result of learning where the brain was, I was very concerned about this cut we had made the previous day ... 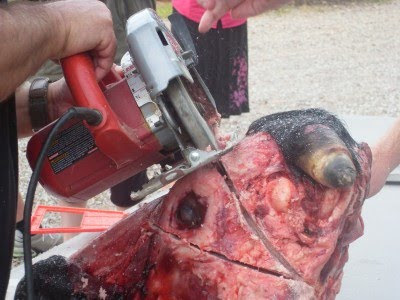 We had made that cut because one of my daughter's friends had looked up the thickness of a cow skull for us. The internet said it was 4 inches thick.

That's true in places, but it's not true in the place we're cutting in the picture.

As it turned out, that cut had just nipped the front of the brain. We had done a little damage, but when we got the brain out, you couldn't tell.

The way we got it out was first to cut off all the meat we could. A lot of meat was around the area of the ears, below the horns. In fact, we were practically able to cut the horns off without cutting any bone. They were attached mostly by skin and cartilage.

Once the horns were off, I was able to pry off large pieces of bone on the forehead.

Bit by bit that exposed the brain.

Once the brain was exposed, my daughter's science partner showed up. This is another young lady of 13 or 14 years of age.

Believe it or not, she was very excited to help get it out.

Together, we figured out that you could reach right in through the vertebra at the back of the skull and help lift the brain out of its cavity. If you do, you will get blood and goop all over your hands, but she didn't seem to mind.

It was a special moment when our fingers touched, mine from the hole in the top of the skull, hers through the vertebra at the back, both of our hands covered in messy liquids that we would normally diligently avoid. We both laughed, as young friends, both male and female, provided a background chorus of oohs. It was like a movie.

It took about an hour, but now that I know the process, I think I could do it in an hour, even with the inappropriate tools we were using.

There. Now the internet has a "how to remove a cow brain" page.

Labels: head, how to remove a cow brain, skull